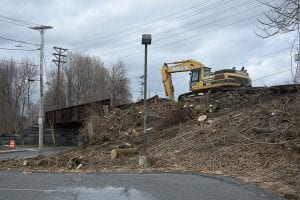 WESTFIELD – Construction projects are not being disrupted in the city, according to Assistant Civil Engineer Jeremy Cigal. He said engineering has a full crew that is working on planning and reviews and construction work on Western Avenue has started.

Cigal said the crew is always sensitive to Westfield State University’s activities and had taken advantage of spring break to do some work. “Now there is a longer break, and less to schedule around,” he said.
The mild weather has also allowed for some early starts on construction. The railroad bridges on Thomas and Chapel came down earlier in the week, and the one on Orange Street in the process of being removed for the central downtown section of the Columbia Greenway Rail Trail.

The City posted a traffic advisory, stating on Thursday 03/19/20 and Friday 03/20/20, construction crews will be working on Orange Street requiring Orange Street to be closed from Elm Street to approximately Maple Street, with no thru traffic.

Additionally, Orange Street will not be accessible from Maple Street, with no thru traffic will be allowed.  Traffic will have access to the rear courthouse parking lot and local traffic.

Also, no thru traffic from Morris Ave to Maple Street or Elm except for local traffic.

This closure will be in effect both days from approximately 6: 30 AM until 5 PM on Thursday and 6:30 AM until 3 PM on Friday with the roadway re-opening to normal traffic flow at the end of each construction day.

Installation of deep anchor dowels at abutments has also began this week on the rail trail. The work required to install anchor dowels at each of the bridges followed behind the demolition activities. This work will be performed from atop the existing abutment structures at Thomas, Chapel, Orange and Main street bridges, and is not anticipated to affect vehicular or pedestrian traffic on the adjacent roadways.

Removal of existing railroad timbers and rails has also begun and will continue for several weeks. Existing timbers and rails will be stockpiled at access points established for each segment of the rail trail until enough material is available to load and transport for disposal offsite.

Existing railroad steel tracks will be stockpiled and made available to the railroad company for removal at their convenience. This work is anticipated to begin at the northern limits of the project and progress in a southerly direction.

Civil Engineer Mark Cressotti said it is easier to do the work with less traffic on the road. He said he didn’t think construction crews should be impacted by limitations on gathering. “You’re not going ot see a crew of that size,” he said, adding,.“I would not anticipate a slow down or halt to construction activities.”

Cressotti said he had scheduled a public hearing for the design of the Westfield River Levee multi-use trail, which will have to be rescheduled.

He said the Department of Public Works is also not affected at this point. “There are concerns should somebody get sick,” Cressotti said.

“We are operating at full staff but limiting contact with the public. All of our people are issued personal protection equipment and instructed on how to stay safe,” said DPW Director David Billips.